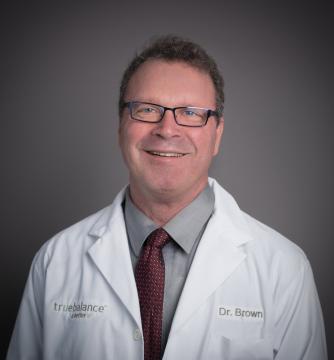 Dr. Brown graduated with a degree in Family Medicine in 1983. He practiced as a general practitioner at a new hospital in Mundare, Alberta, for 6 years. He then went back to specialize in OBGYN at the University of Alberta Hospital in 1995.

From the time Dr. Brown graduated from the university to now, he has been a part of a group practice at the Grey Nuns Hospital. In 2000, he opened Laser Elegance for You as the Medical Director, which is now known as True Balance. He became board-certified in Functional and Regenerative Medicine from The American Academy of Anti-Aging. This led to Dr. Brown's primary interest in bio-identical hormone replacement therapy. In 2007, Dr. Brown started BHRT at True Balance.

Dr. Brown is the Author of the book: "Discovering Your Truebalance with Bioidentical Hormones "
One day, on a routine visit, a patient of Dr. Brown’s asked a simple question:
“What do you know about bioidentical hormone therapy?”

His lack of knowledge started to gnaw at him. What happened next is the story of his mission to teach himself all that he could on the topic, only to find solid information scarce. In this detailed book, he shares what he learned through extensive research and collaboration with like-minded practitioners

Now retiring from his Obstetrics practice, he will focus on BHRT, Gynecology and non-invasive treatments for urinary incontinence at True Balance.

Disclaimer: Official website of True Balance Longevity Med Spa. The information throughout this medical spa, skin care, and medical weight loss website is not intended to be taken as medical advice. The information provided by True Balance Longevity Med Spa and Dr. Ron Brown is intended to provide general information regarding BOTOX, Juvederm, Belkyra, laser hair removal, acne treatment, incontinence, vaginal rejuvenation, medical weight loss, facials, manicures, pedicures, massage, and more for residents of Sherwood Park, Spruce Grove, St. Albert, and nearby Edmonton, Alberta, Canada. This website is not intended for viewing or usage by European Union citizens. If you are interested in finding out more about our services or scheduling a consultation, please contact us today for a personal consultation.